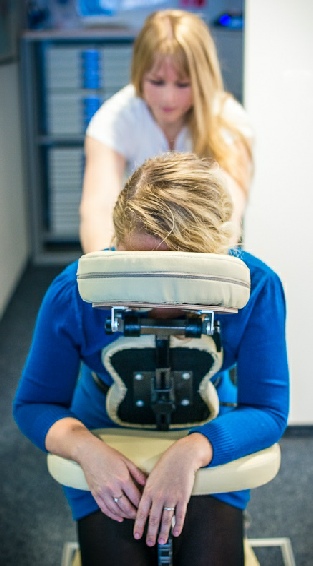 A study published in the International Journal of Neuroscience found that 15 minute chair massage given twice weekly for a period of five weeks lowered anxiety, improved alertness and even showed increased speed and accuracy on math computations.
['Massage therapy reduces anxiety and enhances EEG pattern of alertness and math computations", PMID 8884390].

Stress in the workplace is endemic and can cost companies in absenteeism and productivity. In a 1999 report by the U.S. Department of Labor’s Bureau of Labor Statistics, occupational stress, classified as “neurotic reaction to stress,” accounted for 3,418 cases in 1997. The report noted “the median absence from work for these cases was 23 days, more than four times the level of all nonfatal occupational injuries and illnesses.” The same survey found that those most affected were white collar workers, such as technical and sales occupations.
[U.S. Department of Labor Bureau of Labor Statistics Summary 99-10, September 1999, accessed 2008]

The benefits of massage therapy in a corporate or work environment has been researched for a number of years now. A 2005 study conducted by the Touch Research Institutes in Miami, Florida found that massage therapy had stress-alleviating effects on a variety of medical conditions and stressful experiences.
["Cortisol decrease and serotonin and dopamine increase following massage therapy," PMID: 16162447].

The ability of massage to bring relaxation and to relieve stress seems to be obvious. A pioneer confirming the value of massage therapy is Tiffany Field PhD from Touch of The Research Institute at University of Miami Scholl of Medicine. Based on her research she clearly showed a reduction in anxiety and stress due to massage. According to experts from Harvard - physical illness are more difficult to treat when the person suffers from stress or anxiety. The scientific community finally received clear evidence that stress and anxiety worsen many types of chronic, potentially fatal diseases. Massage therapy has repeatedly demonstrated its ability to reduce stress, anxiety and fear.
[Why Massage's Reduction of Anxiety Is So Important by Nicole Cutler, L.Ac., June 16, 2009, Institute for Integrative Healthcare Studies]